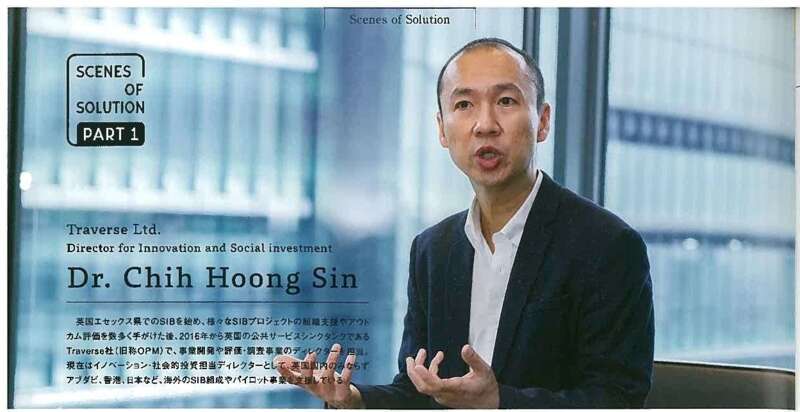 Solving social issues through a new technique for public and private collaboration, drawing in new sources of finance. The Development Bank of Japan (DBJ) has just signed an agreement with UK based Bridges Fund Management, forging a strategic partnership to support mutual learning about how to use innovative financing to solve social problems in Europe and in Japan. We interviewed Dr Chih Hoong Sin, Director of Traverse, a company based in the UK, with extensive experience of designing SIBs and also evaluating them. Dr Sin supported the DBJ's partnership with Bridges Fund Management, and in this interview he talks about how DBJ can play a role in growing SIBs in Japan and to manage expectations.

Dr Sin explained the development of SIBs in the UK, and how the different phases of development revealed an evolving logic. He described how different forms of intervention from the UK Government stimulated the development of different parts of the market, and that it is important for Japan to think about not only initiating SIBs but using them as a vehicle to transform the way state and various societal players work together to achieve better outcomes for society.

Dr Sin explained how the use of outcome funds can be helpful in incentivising different players to engage with innovations to improve social outcomes, so that there are more diverse sets of players. Outcome funds also reduce the transaction costs, which can be high when simply developing individual outcomes-based projects.

He indicated that some parts of the Japanese Government seemed to misunderstand the purpose of outcomes funds, and may think that they are subsidies. He went on to describe different ways of setting up outcomes fund to gradually move a country towards sustained outcomes-based ways of doing things. He also described new trends where global outcomes funds are now being set up.

Speaking about the role of the DBJ, Dr Sin felt that the risk appetite for this form of social investment is still low in Japan. Hence there have only been a few projects to date, and the sizes of projects have been small. Nonetheless, Dr Sin acknowledged significant progress in Japan in recent years.

As a major player in the financing-for-development market in Japan, the DBJ can play an instrumental role, but needs to adopt a strategic rather than a project based approach.

Dr Sin felt that it would be wise for DBJ to align its short-term priorities for social investment with the Japanese Government's policy priorities, and pick out one of two policy areas that lend themselves well to the Bank's remit. For example, healthcare is a key concern of the Japanese Government, particularly digital health interventions that can be scaled up in relation to an ageing population's needs.

The DBJ can develop a prototype SIB in this area. By taking on the initial financial risks associated with doing something new, DBJ can help establish a proof of concept. If this works, the template can then be replicated at lower risk, and at scale. In this way, the DBJ can start incentivising regional banks and other sources of financing to enter the market for social investment.

Dr Sin compared the ecosystem in Japan with those in Hong Kong and Abu Dhabi, two other countries he has been supporting that are also new to SIBs. He described the different drivers for Governments to engage with SIBs, and explained that there is a common misunderstanding that SIBs are tools to help Governments save money.

He gave examples of how SIBs can and should be used to improve outcomes which do not always lead to direct fiscal savings, and that these different models of SIBs need to involve players that are not the 'usual suspects'.

Comparing the financing market in Abu Dhabi with that in Japan, Dr Sin felt that each country needs to play to its strengths but also bring in 'disruptors'. For example, Abu Dhabi ranks high on the Global Giving Index and, like Hong Kong, has a very well established 'giving' culture. However, this does not translate easily into social investment and the donors can often think that it's just about 'giving out money', rather than understanding that financing under a social investment model is only a vehicle to achieve social transformations.

Dr Sin emphasises very strongly that countries must avoid simply repackaging philanthropy as social investment. He feels strongly that this will be wrong as we are simply 'cannabalising' philanthropy, and hence diverting it from what it is best placed to do.

Instead, countries should consider how they can bring in disruptors to make their existing systems work differently, and in the interest of social outcomes. Dr Sin described models he has been involved in which brought in 'outside' social investors with higher risk appetites and greater familiarity with investing in social outcomes. A SIB can then be designed with a tiered capital structure where these investors 'take the first loss'. In doing so, they help lever in social investors in the host country who are less familiar with this mode of investment and are therefore more risk averse.

Tiered capital structures have different risk-to-reward ratios. Therefore, we can build a model that blends different sources of financing with different risk appetites. Over time, the domestic investors build up their confidence and knowledge of these innovative forms of financing, and are therefore in a better position to take more risks.

In Japan, the types of investors and sources of financing are very different. While the Nippon Foundation is a prominent philanthropic organisation that is active in promoting social outcomes, there is a dearth of philanthropic capital as much of the civil society sector in Japan is reliant almost entirely on state funding. Japan, however, is known for its big businesses that are global brands. Businesses here can play a role, and it is interesting that many of the people Dr Sin has spoken to in Japan are from business and industry.

He invited the DBJ to consider ways of levering in different sources of financing, playing to the strengths of the Japanese ecosystem but also disrupting it. He noted that Keidenren, the Japanese Business Federation, had spoken to him about entering the social investment sphere and that there is also growing interest in businesses doing more to align themselves with the Sustainable Development Goals. He looks forward to seeing how the situation in Japan develops in coming years, and the role that DBJ will play in it.

Japan in Spring: the budding potential for Social Impact Bonds

I was flattered to have been invited back to Japan in April to speak at the 2016 Social Investing and Corporate Social Responsibility Forum, held at Meiji University in Tokyo

In the previous blog in this series, I shared some key messages from a recent speech I delivered at the 2016 Social Investing and Corporate Social Responsibility Forum, held at Meiji University in Tokyo. In this blog, I summarise some of the thinking...